Helium stick team building game is the best game for corporate team building. One of my favorite team building games or team icebreaker activities is sometimes called The Helium Stick or even Lighter than Air. The rules are pretty simple. Organize your group into small groups of eight to ten people (you’ll need at least six people per team to make it work, but more than eight or nine might get cumbersome.) Take a very thin dowel rod (the thinner the better) and hold it horizontally about chest height and ask the participants to hold the stick onto of their index fingers and lower it to the ground as a team.

Every team member has to keep both index fingers in constant contact with the stick at all times. If even a single team member loses contact, the team has to start over at chest height again.

The stick can only be resting on the index fingers. So team members can’t wrap a finger over the top of the stick or slide fingernails over the stick, etc. (They can’t force the stick down.)

Every team member must be standing and the starting point is chest height of the tallest person. (You have to give this rule or everyone will drop to their knees and try to cheat right away.)

The goal is to lower the stick to about one-foot off the ground.

Once the teams begin to touch the stick, the challenge will present itself pretty quickly. The stick is so light that the up-force from each of the fingers trying to stay in contact is greater than the weight of the stick. The result? Immediately, the stick will begin to rise. Some team members will try to coach the others by giving verbal instructions like, “No, let’s go down!” When that doesn’t work, they will get more vocal (because the problem is that everyone just isn’t listening to the leader, right?), and they will shout, “Down! Down! Down!” After they struggle a while, take a break and ask the team to form a plan based on their past experience. Eventually, the teams will start to figure out the secret to getting the activity to work.

This is a fantastic team building game that will let you draw lots of conclusions about verbal vs. non-verbal communication, the difference between loud, vocal “leaders” and those who lead by example, and more. Have fun with this team building activity!

5 games for virtual team building that you can’t miss 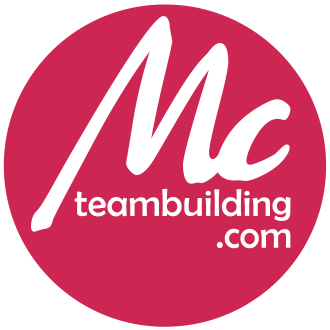